Best Karate Lessons – How to Stop Bullying Through Confidence 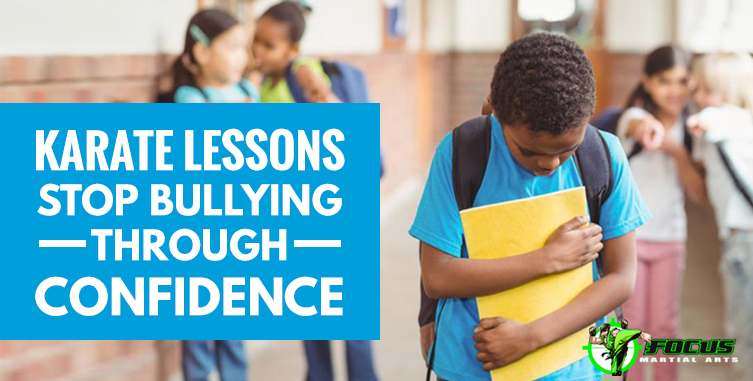 Bullying has been one of the many problems in our society today. It can cause a traumatic experience for children. This can cause them anxiety and lifelong depression which oftentimes can even lead to suicide.

According to studies, 28% of students between the ages 12-18 are bullied each year. Even an independent research survey commissioned by the Australian Federal Government found that 1 in 4 students is affected by bullying in schools. And these numbers are real.

As a loving parent or guardian, you want to be able to protect your child and keep them safe. One of the best ways to prevent your child from being a victim of bullying is by enrolling them in karate schools.

As a martial arts instructor, parents often ask me about the best way for their children to deal with bullies. While there are various approaches you can take to address bullying, one of the best ways to instill self-confidence in your children is by educating them on what they need to know to best counter a bullying situation. Taking karate lessons will not only instill self-confidence but will also prepare your child on how to properly respond and defend themselves. That’s why many schools today are employing anti-bullying programs through martial arts for kids to help battle the growing statistic.

Bully-Proofing – CONFIDENCE is the BEST DEFENSE!

Rhys, one of our students, was in Year 5.  He was a very thin, lanky boy – who really wouldn’t hurt a fly.  He is kind and had a great nature.  Quiet compared to some others.  He did lack confidence and it showed.  It showed in the way he walked, his shoulders hunched to almost try and hide.

He was being bullied into a karate school and his mother chose to put him into Focus Martial Arts Brisbane to take karate lessons.  She wanted him to be able to defend himself if he needed it, but more importantly – to be able to have the confidence to stand up for himself.

I clearly remember the day Rhys stood up to the bullies.  Probably one of the best days I ever had as an Instructor.  He came running into our martial arts school, with a grin from ear to ear.  I could immediately tell he had some important news to tell me.  “Why are you so excited Rhys?”  I asked.

“I stood up to the bullies,”  he replied.  “The bully said get out of my way or I will put you on the ground.  I was just standing there, I wasn’t in his way.  He went to push me, and just like we had been practising in our karate lessons, I did the wrist lock number 2 with a takedown and put HIM on the ground.  I was awesome at it.  And then I said, “Who’s on the ground now?”  I didn’t hurt him Miss, but I did put him in his place.”

When I followed up with Rhys a few months later to see if he was still having bullying issues, he gladly replied that he hasn’t had any since – because he had confidence.  He actually told me that he and the big bully were now friends.

We strictly guide children to follow the rules of their school about bullying. But when they ask what should they do when nothing happens and they are still bullied – this is where having some self defence skill becomes imperative. By taking karate lessons, students learn how to protect themselves and gain enough confidence to use it only when necessary.  We do not promote violence but we do believe that your child needs to be able to defend themselves when the need arises. And when they know they can – usually they don’t have to use it – because they no longer get bullied.

While we’re all for the bullying victims, let’s not forget that the bully has issues to deal with as well and also needs support. Children who bully often lack awareness of how others feel. Oftentimes, kids bully because they have trouble managing negative emotions like anger or insecurity. Sometimes, these bullies copy the behaviour they see at home and treat others the same way.

What if your child was the bully? What can you do to stop your child from bullying others? The most important step is for parents to know that you can help your child to stop bullying. Secondly, you need to take immediate action. Your child should know that bullying is unacceptable.

Kids who bully need help developing problem-solving skills that don’t involve aggression. By enrolling them in karate lessons, you may provide them with opportunities to use their natural leadership skills in a positive way. If your child demonstrates bully-type behaviour patterns, the Focus Martial Arts program can redirect those negative traits into positive gains.

When children learn to respect their instructors and their peers, they become open to looking at their own flaws. They then begin to improve themselves and emerge as better human beings.

Along with the values karate schools teach, we have the power to put an end to bullying. Enroll your child in our karate classes for kids today and see the difference. Book a FREE TRIAL program now!

Fitness and Self Defense, two major goals parents have when looking for Teen Martial Arts in Brisbane. It’s time to give your teenager a workout they will enjoy and will relieve teenage stress and build confidence.

Discover why parents love our Family Martial Arts lessons in Brisbane. "A Family that Kicks Together - Sticks Together!" What other activity or sport can you all do together, that you ALL enjoy?

Sick or boring fitness workout? Imagine a fun, calorie-burning, body-toning workout that you LOVE! Perfect to do with friends, or make new ones. Cardio Kickboxing is a workout like no other! our Fitness Kickboxing Classes in Brisbane is where you will see real results. Many losing 10kg+ in a few short weeks! Are you ready to for a change?

Fitness and Self Defense, two major goals for anyone looking for Brazilian Jiujitsu in York . It’s time to change up your work out and get the results you’ve been looking for.

An after school pick up service that you can have peace of mind, knowing your kids are getting life-long benefits of building confidence, focus, resilience and mental toughness. Our kids martial arts classes, as a fun after school program are the perfect alternative to OHSC. Plus lot of school holiday activity choices in our Brisbane martial arts academies.